A Reader’s Experience With Binary Options

By Step • Posted in Articles, Binary options experience • No Comments 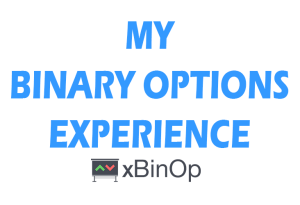 I’ve received another very nice email today. And I’d like to share it with you (after the author’s permission of course). It’s a story from one of our readers, who have had a first-hand experience of what stress and emotions do, once your trades aren’t ending up in-the-money but also when the successful trades raise your trader’s ego.

I recommend you all to read this story, because it is really important to know what emotions can do to you. Trust me – you have to learn to deal with them at one point or another, if you want to be successful in this business.

I’ve come across your binary options website today and learned a great deal of useful information. Thank you very much and keep it up. Personally, I’ve been following binary options for about a month, a little skeptically though. I’ve read a lot of articles, watched videos such as euromillionaresystem and so on. I’ve tried demo accounts, quite successfully.

So, I’ve decided to try it out, this week, for real. Successfully? Kind of 🙂 I’ve come across an australian broker high low that offers minimum deposit of $10 when using wire transfer, but also a minimum trade is $10. So, I’ve invested $100 that soon became $230 and suddenly nothing… I’ve lost courage… However, the second day, with a clear head and without any kind of strategy, I’ve tried again with $ 50 and they were gone sooner that I would have wanted. So, I’ve found another broker and came across IQoptions.

Minimum deposit $10, minimum trade $1. Let’s do it. In 2,5 hours, $100 became $400. But in the next 15 minutes nothing 🙂 The next day $20 became $302, in about 3 hours and nothing again in the following half an hour 🙂 another $60 over-invested… Here I come to the conclusion that it’s all about the mind and mainly discipline 🙂 As long as I’ve followed my feelings and a gut, everything was ok, but 2-3 lost trades and strategy was put aside. Probably, the biggest mistake. I’ve followed with absurd $100 trades that didn’t work and everything was going down a hill. Trading time has the biggest influence on me. You can really not concentrate for  more than 2-3 hours. What do you think? Thank you for reading.

I wish you a lot of success.

The best thing is that the reader actually realized where the problem lies. Now, just a bit of a practice and another great successful trader will be born! Thanks for the message.

What can YOU learn from this story? Probably that you should always follow a money management plan of some kind. What do you think?