Initially, there were some minor problems with our strategy BERSI Scalp. We mentioned that almost a month ago in the article “The results and the impressions of the traders“. I want to apologize for all the problems and I have good news for you:

All the problems have been resolved.

The revised strategy is successful

Hi,
I don’t know why, but at the beginning the new version did not work. But then it started to work and it is working even better then the previous version. I tried to open 6 graphs at the same time and all of them were working :-). This would have never functioned using the previous version. There, I could open max. 2 graphs and even with them I had problems. Great job. However sometimes when I want to change some settings, it takes a little while, but that are just details which don’t matter.

7 trades, which I did not trade (the arrow was near a major support/resist lines), I think that all of them would have ended as loss

I am going to test the strategy again this week and will give you feedback.

You might think, that you would not be able to filter trades (just like the trader who sent me the above email did). That is not true! Thanks to the PDF manual, which is a part of the strategy, it will be very easy to filter bad arrows.

And what is included in the PDF manual? You can see that  on the table of contents below 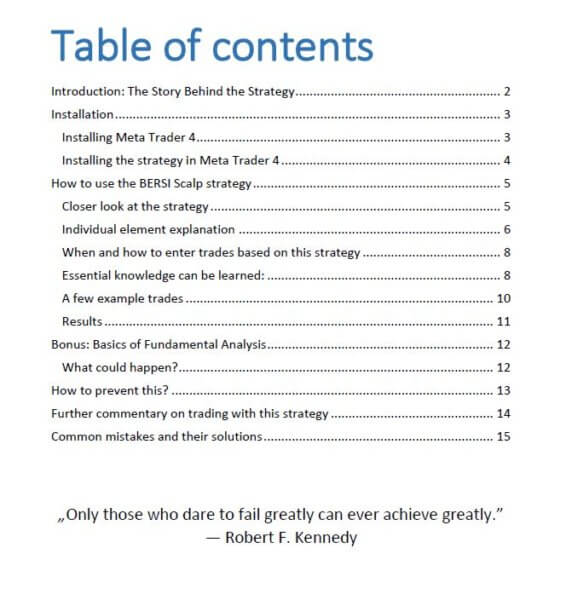 The table of contents of the PDF manual, which is a part of the strategy

As soon as I had the final version of the strategy ready, I didn’t hesitate too much and made a few trades. As you can see in the picture below, the results are more than satisfactory. 🙂 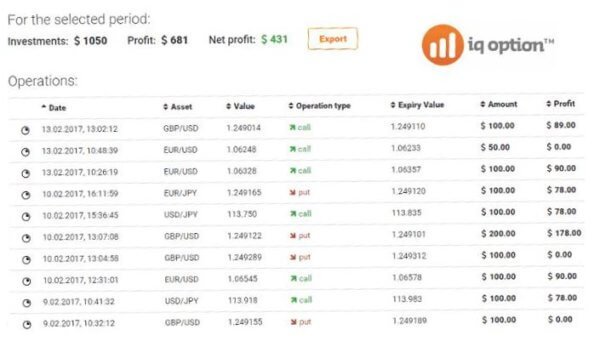 My very first two trades using the latest version of the strategy. You can download it here

How to trade using the strategy BERSI Scalp?

It is necessary to ‘filter’ the arrows. This means that using the rules described in this manual, you have to examine whether it is appropriate to enter the trade or not. For example, if the arrow is a few pips from the weekly line, I would not trade it. The same is when the price is near some important resistance or support line.

On the contrary, when the arrow appears in the direction of rebound from an important support line, I would open even two positions.

– An excerpt from the PDF user manual, which is a part of the strategy.

Plans for the future

As I wrote in my last article, in the next days/weeks I would like to work on video tutorials for the strategy. It is something that a lot of you asked me for and I will be happy to fulfill that. I will simply record my trades and add some short comments. I hope it will help you.

As you already know, the strategy BERSI Scalp is the latest version of the famous strategy saga BERSI. Its predecessors were BERSI and BERSI 2.0, available now to download for free without any obligations, without providing any e-mail address or anything else. So you can try what more or less you can get. J