By J. Pro • Posted in Technical Analysis Show • No Comments

You don’t have to be a technical trader but what you must know are some basic patterns of a technical analysis. A flag and a triangle surely rank among such patterns. They are easy to identify and used for trading or at least as a signal. Let’s take a look at how to recognize them.

How to trade triangles

As the name suggests, you should look for a pattern in the chart, whose shape reminds you of a triangle i.e. a price development heading to the top.  Price spread is getting smaller and must head in one direction. This will result in the intersection of one of the hypothetical extensions of the triangle’s arm and form a new trading signal. This trading strategy is applicable to forex, binary options, cryptocurrencies, commodities, shares… It’s universal; traders call such strategies robust strategies.

Various types of a triangle

The intersection of the arm near the triangle’s top means a new signal.  Which of the arms will be intersected and which way the price will continue to depend on the market’s overall sentiment. For example at the end of 2017 during the cryptocurrency boom, the price continued to fall while all triangles would be broken downwards.

How to trade flags 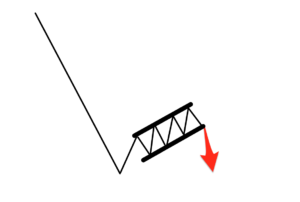 A typical example of a flag

If you are not enthused about triangles (because they are unclear) look at flags. These patterns can also predict movement direction. The main difference between triangle and flag is the situation before the formation of the pattern. The formation of a triangle is preceded by sideways market moves or, a moderate trend.  As to flags, the market is strongly in trend and flag is a signal of consolidation. This is a movement when the market rests and, following a strong trend, small corrections take place. The flag may be in a shape of a triangle but mostly the shape is two parallels.

With the flag trading strategy, one can expect a breakthrough and a return back to trend. This may not be true for 100%  but at least for 50% of cases.

Trading of options or traditional forex trading is not a rocket science. Sometimes it only requires common sense and the knowledge of some basic patterns. Flag a triangle are instruments that should be made part of your trading arsenal for at least passive trading. Anyway, some of you may have done so before using trend lines in trading without being aware of this. As I said, no rocket science.