A Few Things You Should Know About BitcoinCash Hard Fork

Perhaps the most famous crypto created by splitting from Bitcoin and the fourth-largest cryptocurrency bitcoin cash has undergone a new fork creating a new cryptocurrency Bitcoin Cash Satoshi’s Vision.

What is a hard fork

Hard fork typically occurs when developers and miners don’t agree on a proposed change to the software, despite operating on the same blockchain. Their opinions on what the next direction of the cryptocurrency should differ. Therefore, they copy the blockchain and upgrade the software. The original blockchain copy continues running under the original rules. The result is the creation of two different blockchains not able to communicate one with another. This leads to the formation of two different digital currencies.

Why split BCH to and ABC and SV?

The decision to split bitcoin cash into two came after developer Amaury Sechet made a minor change to transaction ordering.

The disagreement escalated and has pitted two of the greatest crypto personalities against each other, Roger Ver and Craig Wright. While both are big proponents of Bitcoin Cash, often referring to the currency affectionately as the “real bitcoin”, the pending fork has split the two crypto-anarchists.

Ver has put his weight behind the new software upgrade, or the current Bitcoin Cash. But Wright – the Australian computing genius who has on a number of occasions claimed to be Satoshi Nakamoto, the pseudonym given to the creator of bitcoin –  argues the software should deviate toward the original bitcoin, hence Satoshi’s Vision (SV), by raising the maximum block size to 128MB from 32MB.

Determining the success of each coin will be at the hands of miners who commit their hash power – the computing power to mine a cryptocurrency. In all likelihood, the miners will commit their power to whichever coin is more profitable to mine. 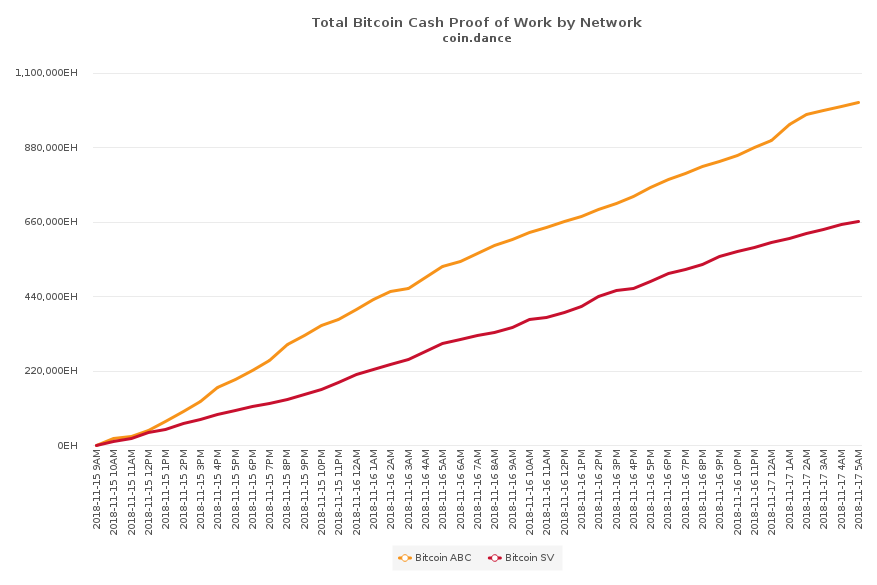 From the very beginning of the fork, the two groups i.e. Bitcoin ABC and Bitcoin SV supporters were competing who is going to win over more miners onto their side to have a stronger network. At one point, a group of miners of the traditional Bitcoin network even gave support to the vision of one of the two competing rivals.

Evolution of computing power of BCH and BSV 2 months after the hard fork (source: bitinfocharts.com)

As the picture clearly shows, for the time being, Bitcoin Cash ABC is the winner. As of today (3 January 2019), this crypto has a double of miners and the price is twice as high compared with the rival Bitcoin SV.

Acceptance and use of forks

Most of the major crypto exchanges, including Binance and Bitfinex, have stated that they support the hard work, meaning owners of Bitcoin Cash will receive 1:1 per new cryptocurrency once the network is upgraded. Thus far, only one major exchange has hitched its wagon to either coin.

BitMEX said in a blog post: “Bitcoin Cash is expected to conduct a hard fork upgrade on 15 November 2018. There are two competing incompatible hard fork upgrade proposals, with the associated clients being Bitcoin ABC and Bitcoin SV. On settlement, the BCHZ18 contract will settle at a price on the Bitcoin ABC side of any split and will NOT include the value of Bitcoin SV”.

In a surprising move, some exchanges have taken the unprecedented step in allowing pre-trading of both coins, a move that Bitcoin SV proponent Wright has criticized, adding that it may be in breach of U.S. short selling rules by allowing trading in a coin that doesn’t actually exist.

Price of BCH and BSV

Bitcoin Cash SV achieved its high (USD 243) a day before the fork. Following the fork, on 23 November  2017, the price fell to USD 39 and later stabilized at around USD 100 USD, where it has remained until now.

It is odd that each exchange uses different names for the two cryptocurrencies. You may encounter the following ones: