Home » Articles » Will the upcoming financial crisis bring Bitcoin back to the spotlight?

Will the upcoming financial crisis bring Bitcoin back to the spotlight? 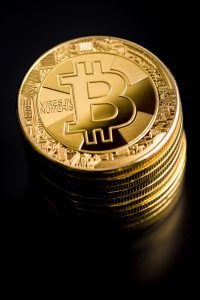 Is Bitcoin going to go up or is it going to fall under $ 8,000? Given the recent events, this is quite a pressing concert, and rightfully so, especially after the Bitcoin price plummet down by more than $ 1,000 in just 90 minutes.

This rapid price drop could have been triggered by many factors. The most mentioned one, though, is probably the 40% decline in the Bitcoin network hashrate.

The unexpected hashrate nosedive was recorded on September 23, only a day before the sudden drop in prices. At the time, the Bitcoin exchange rate was just above $ 10,000. Three days later Bitcoin was already under $ 8,000.

The sudden crash of the Bitcoin hashrate network by 40% from September 23rd.

The hashrate development is associated with the drop mainly because, in the past, more significant movements usually meant a subsequent movement in Bitcoin price.

Three days after the fall, however, the hashrate got back to normal and even went up to its historic maximum (102 Eh/s). Now, it does not seem that this small seatback should stop the growth of the Bitcoin network.

Another factor that could have caused a negative sentiment in the crypto market is to do with the unfulfilled expectations of the launch of Bakkt.

On the first day, term contracts worth hundreds of thousands of dollars have been traded through the platform. This is woefully scarce, given the fact that the market capitalization of Bitcoin itself was somewhat $180 billion at the time. Moreover, Bitcoin’s daily trading volume is around $13 billion.

According to current information, contracts worth a total of $5 million have been traded last week. This is certainly not the eagerly awaited capital injection by institutional investors that many have hoped for.

Two-digit percentages movements in prices have been inherent to Bitcoin since time immemorial, or more precisely, some 10 years of its existence. The prediction or retroactive explanation of a particular movement is often affected by technical parameters.

In this particular case, it has often been said that the Bitcoin price increase recorded in the spring of this year had been too fast or even unhealthy. The price has risen by almost 300% since February, and then up to this year’s high of $13,387. Given this situation, traded volumes have also increased significantly. 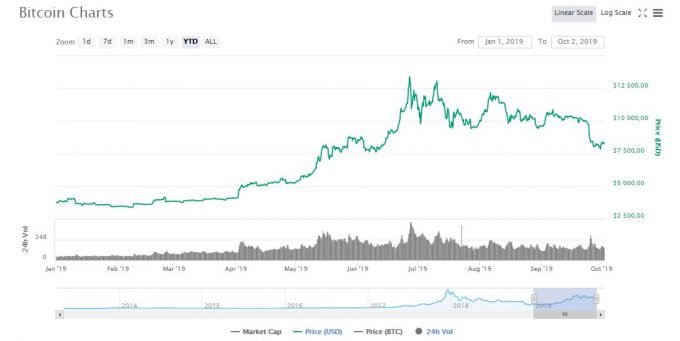 Many therefore welcomed the still ongoing correction. That is also the reason behind the opinions about waiting for a better, lower buying price. If we look at the aggregated Bitcoin demand data listed in the bitcoinity.com order book, we can see that at the moment, the highest demand expectations are accumulating around $ 7600 to $ 7700.

Given the current prices, this does not seem all that bad.

From a technical point of view, it will be important how the current price of Bitcoin performs against the 200-day moving average. Although it has already fallen below, it still could bounce back up over the next few hours. Otherwise, there is an even greater risk of a further price drop.

Is there a further rapid price development ahead?

A transaction fee may also be an indicator of the upward movement of price. Its rapid growth thus signals increased network activity, when stock traders are particularly active. Now, between September 29th and today, the fee has increased, as shown in the following graph.

Also interesting is the comparison with the US stock market, where on October 1st a fall of 1.3% has occurred, due to weak macroeconomic data in both Europe and the United States.

Adding to this the trade war between China and the United States, the tensions around Iran, the weakening of the German economy and other negative indicators, this can be an opportunity not only for gold but also for Bitcoin as an alternative investment in times of crisis. The last big crisis came in 2008 and has in fact been the trigger of Bitcoin creation, which had since grown by thousands of percent.

Will Bitcoin continue this trend? What is your opinion on the drop in the price of Bitcoin? What do you think was the trigger? Will Bitcoin exceed the $ 10,000 per 1 BTC threshold by the end of the year?

Let us know in the comments below.