Are Stablecoins The Future Of Cryptocurrencies?

In the world of cryptocurrencies, which is extremely volatile, innovations often arrive nearly every hour. While only a bit over a year ago we could see the bitcoin gold rush culminate with millions of dollars invested by people who didn’t have a clue of how cryptocurrencies worked, now the focus has shifted to stablecoins.

Some people believe that stablecoins could be the future of a decentralized monetary system, others see them as a new bubble. The interest in stablecoins among the crypto enthusiasts has significantly risen. The term stablecoin designates cryptos pegged to “real” currency (typically, the dollar).

Unlike bitcoin, ethereum and other digital tokens, the volatility of stablecoins is fairly low. It’s not by coincidence that they are similar to physical currencies. Anyway, the goal of the creators of stablecoins was to bring cryptos closer to fiat money.

Chart showing the price of TrueUSD (TUSD) since it was launched

While the majority of cryptos don’t fit for standard payment transactions due to their instability, stablecoins are the opposite. Thanks to their similarity to fiat money, they are easier to grasp and more trustworthy for an ordinary consumer. In addition, the tokens are backed by real money. Example: The number of USD deposited on a bank account belonging to the creators of TrueUSD is the same as the number of issued  TUSD tokens. At least, theoretically.

The price fluctuation of tenths of a percent (up to a few percents) has so far been supporting the vision of the creators of stablecoins. The long-term stability of the stablecoins is achieved in two ways: IOU  and collateralization.

Stablecoins was known as IOU (I Owe You) such as (True USD, USD Tether) are backed by underlying assets held by a particular entity on a bank account. The entity is usually an organization that takes care of the running of the cryptocurrency.

A clear disadvantage is the absence of true decentralization. Money used as backing belongs to a particular organization that can use it for whatever purpose it wants.

True decentralization of stablecoins is promised by holding a financial backing through Ethereum smart contracts i.e. collateralized stablecoins (such as Dai, Gemini Dollar, Basis). Like IOU, stablecoin is funded by the same entity that takes care of its operation. However, the funds are “locked” within a contract and owned by this entity which cannot do anything about them.

All actions with the assets  (i.e. transfer to another account) are taken based on the decisions of the community of holders of the given stablecoin. Collateral allows the much-needed decentralization but complicates the management of the stablecoin.

Low volatility is achieved by flexibly reacting to demand & supply. When demand is growing, organizations issue new tokens. When supply prevails they buy the tokens back to boost demand.

An example of stablecoin: USD Tether

USD Tether is one of the first stablecoins created on the concept of the bitcoin blockchain. It was first put into circulation in October 2012 by Tether Limited, a company linked to Bitfinex. Currently, there are around 1.8 billion tokens circulating in the public domain (the peak was 2.5 billion).

Due to the 1 to 1 backing by USD,  the trust in tether depends on the trust of the token holders in the entity that holds the fiat reserves. Yet, the company has not presented the desired audit report so far. All that Tether Limited showed was a letter from the bank confirming the balance on its account. 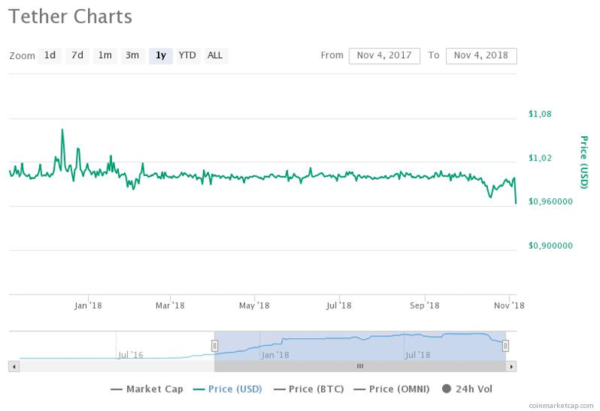 At present, more than 50 stablecoins are in circulation (or ready to be launched). Not all of them thrive. NuBits is struggling because of negative demand/supply ratio. Despite being pegged 1 to 1 to USD, the rate used by exchanges for trading is $ 0.04 and the downward trend continues.

An example of a collateralized stablecoin is Gemini Dollar created by the Winklevoss twins. This currency built on ethereum blockchain first appeared in the market in September 2018. Like other stablecoins, it is pegged to the dollar. Trust in Gemini stems primarily from being approved and regulated by the New York Department of Financial Services. In addition, Gemini periodically publishes financial audit reports contributing to the overall trustworthiness of this stablecoin.

At the turn of the year, it is planned to issue new collateralized currencies. One of them is the Basis that has recently raised $133 million in funding.

The key evidence of  the “volatile stability” of cryptocurrencies is the way they behave in the market:

The table demonstrates that in terms of price, Tether is more stable than Dai, but less than True USD. The value of NuBits, struggling to strike an equilibrium between demand and supply, continues to fall.

Don’t you think that things are evolving in the opposite direction than they should?