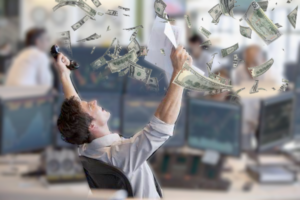 What is your idea of a successful trader? Is it the one whose number of profits is bigger than the number of losses? Most people believe that to be seen as a “successful trader” you must turn into profit seven, eight or even nine out of ten trades. Is it the case, indeed?  What if the opposite is true? Let’s take a look at what is known as the risk reward ratio, indicating the proportion of profits and losses.

What is the risk reward ratio?

If you open a trade with a stop loss of 20 pips and take profit set also at 20 pips your risk-reward ratio will be 1 to 1. By the way, we have already discussed RRR in our article How to set RRR, SL and TP. If you read the article or know RRR from other resources we recommend you stick to the 1 to 1 ratio. However, is 1 to 1 really a barrier that should not be exceeded?

John Murphy and Michael R. Rosenberg have written a few books about technical analyzing and published results of well-known trading strategies using moving averages, RSI, MACD and others What was their conclusion? The majority of correctly set strategies (set based on the instrument’s volatility) using the ratio of 1 to 1 lead to success in at least 50 percent of all trades.

If we change RRR in our favor toward taking profit i.e. risk of 10 and profit (reward) of 20 pips our success will diminish and we will generate profit in 2 or 3 instead of 5 or 6 out of 10 trades. We must anticipate this and don’t think that by increasing RRR and extending take profit we will automatically generate profit in 50% of trades. Remember: To correctly set the time of closing a trade is equally important as the time of opening it.

RRR of 1 to 1 is, to a large extent, a psychological barrier. It’s because the bigger the take profit vs. stop loss ratio, the less successful the trading strategy.

How to profit from a loss

Paradoxically, a loss might be the driver to a future profit. If your trading strategy is successful at 50% and your RRR is 1 to 1 you need to turn at least half of your trades into profit to reach the break-even point. With RRR of 1 to 2 it is all different. 11 profits (i.e. 19 losses) out of the total of 30 trades are enough to get into black numbers.

You may argue that all we change is stop loss and take profit, affecting RRR (total success rate), but the trading strategy remains the same. You are right, we leave the strategy untouched but significantly influence its results. Try it out, at least on a demo account and some historical data. You will see that a bigger percentage of losses may eventually drive you to profit.

Forex trading, as well as trading other instruments, is, to a large extent, affected by psychology. Most traders simply don’t feel good when losing 19 out of 30 trades. Sometimes even unpleasant experiences are a path to success. Nevertheless, will the success rate change with the change of RRR? How to prevent it?