In 2017 market capitalization of all cryptocurrencies exceeded USD 790 billion. This is more than the annual budget of the world’s second most populated country, India. No wonder that digital currencies attract attention, experts argue about the future development, huge corporations analyze the revenue potential and various sorts of hackers and ordinary thieves make attempts to steal the currencies from their holders.

The world’s leading cryptocurrency and the first one under the spotlight, bitcoin reached its high in December 2017 when it was traded at the largest exchange for USD 20 000. Today it’s still a valuable investment commodity with the safety issue not yet resolved.

According to experts, the value of a blockchain will surely grow. Resource: bitcoin.com

To keep bitcoin safe from the hands of all thieves is a job for bitcoin wallets, encrypted applications generating pairs of cryptographic keys. One of the keys is a public address used for transactions. This is an address you tell people wishing to send you some bitcoins. The second key is a password which allows you accessing, converting or selling the stored bitcoins.

The main disadvantage of most of the wallets is their dependence on operators, typically crypto exchanges and traders. The credibility of these third parties has been undermined by several scandals in which up to hundreds of thousand bitcoins were stolen.

Bitcoin Core, the official bitcoin wallet developed in 2009, the same year in which bitcoin was born, provides efficient protection against theft. Bitcoin Core in its current shape is a result of a collective effort of hundreds of developers.

BC as a theft-proof box

Bitcoin Core secures your coins at multiple levels. First, each transaction is tested at several levels, secondly, BC is protected against external attacks, thirdly BC helps as a protection against tempering by software programmers.

One of the weapons is a  limited number of transactions per second. Cryptographic tasks in which miners are using powerful hardware cost a lot. Thanks to the enormous growth of transactions in the recent year a transfer transaction taking 30 minutes and costing a few dollars is no exception. The more users, the higher the costs.  By the way, Litecoin is addressing this issue and, in our opinion, its growth potential is huge. 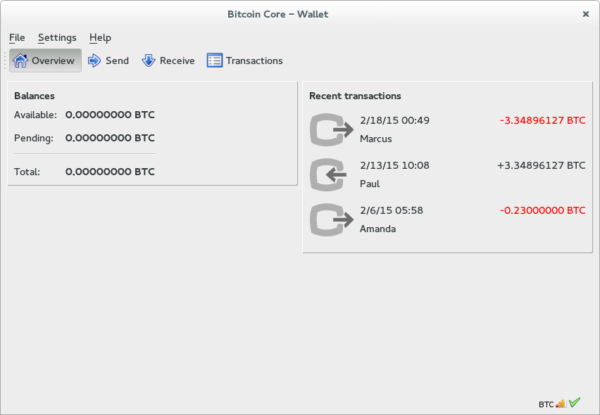 Why to use Bitcoin Core

BC controls and manages the blockchain, a core structure used for executing transactions and keeping bitcoins. In parallel, Bitcoin Core verifies the validity of individual transfers through a series of complex tasks. Each confirmation requires great computing power. People doing this work (called “mining”) on their computers are rewarded in the form of new bitcoins.

Bitcoin Core is nearly a perfect protection. To have your own Bitcoin Core wallet is an important thing. It can protect you in the case of fork (i.e. split of the original currency into two).  When stored in a third party application it may happen that the third party denies you access to the blockchain and you will lose all your coins. Some people may argue that this is not happening. Don’t get confused; the opposite is true. The year 2017 was rich in such events.

Not all that shines is gold

Nothing is absolutely perfect and Bitcoin Core is no exception. One of the biggest flaws is that Bitcoin Core doesn’t allow trading. Simply because it has no safe protection for this.

The power consumed by mining represents even a bigger problem. During the verification process, the software is checking each transaction down to the origination of the crypto. The number of bitcoins i.e. the number of data that must be downloaded continuously increases. In March 2013 it was 6GB, whereas in early 2018 nearly 150 GB. To download bitcoin takes several hours, sometimes even a few days. Close to perfect protection is compromised by huge computing consumption, which is an issue some other wallets try to tackle (we will soon publish an article about them).

If you had purchased one bitcoin on 18 July 2017 you would have paid for it USD 50 000. If you had sold the same bitcoin one month later, you would have received  USD 95 000, almost a double. However, if you had decided to sell it after 14 December 2017, you would have gained USD 350 000! One way how to make money on bitcoin is to buy and wait until the price grows and then sell.

Some Forex brokers such as Bitcoin Plus500 or IQ Option allow trading bitcoin.  This type of trading gives you an advantage in using the leverage. Maximum leverage currently possible is 1:30. What does it mean?

Using a leverage means to buy multiples i.e. buy more than what you can afford. Does the money in your pocket allow you to buy 0.1 (10%) BTC but you want more? Use leverage and buy the whole bitcoin. The whole bitcoin will cost you one-tenth of its price. If the price grows your profit will be the same as if you had invested the whole bitcoin!

The dark side of using a leverage is that if the price goes down your loss will be much bigger than without the leverage. A ten percent price decline would eventually deplete your account.